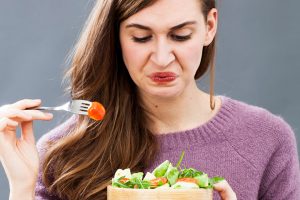 Right from our birth till the end of life, our life revolves around food. Some people live for food while some feel “We eat to live and not live to eat”. Some people tend to eat more when they are angry or upset while some tend to lose their appetite. Either way, it can cause eating disorder.

Some of the common eating disorders are as mentioned below –

Anorexia nervosa is the disorder where a person fears gaining weight and to avoid gaining weight they either start skipping food or start taking a very small quantity of food. A body needs sufficient food (which body convert into energy) to function normally. Lack of food or energy can lead to low blood pressure, anemia, insomnia, infertility, heart problems, brain damage. It is a very dangerous type of eating disorder.

Binge eating disorder is characterised by eating abnormal large quantities of food at more than normal eating speed. It includes eating even when not hungry physically or eating till it gets uncomfortable. It often leads to weight gain and further increases guilt and self-loathing.

Bulimia nervosa is the eating disorder where the person cannot control binge eating but try to compensate for binge eating by throwing up forcefully or by using extreme laxatives or by excessive exercise. They do not want to gain weight or look unfit but do not have control over eating.

Eating disorder is not caused by a specific reason, in fact, it is caused by a combination of various reasons –

Social: Size zero for women and more masculine body for men are the new and more appreciated body structure.  This can build a lot of pressure and force a person to eat abnormally less.

Emotional: A recent emotional trauma can lead to loss of appetite. It can also lead to over-eating as the person tries to find comfort or company in food. People tend to do this to overcome emotional turmoil but end up becoming habitual to the diet.

Biological: Imbalance of chemicals that controls hunger or appetite can also cause eating disorder.

Any form of the eating disorder can lead to various physical or psychological problem.

For Entrepreneurs Make a Payment

Interested in our services or are you an entrepreneur?